a certain video game that was released early last month has sort of taken over our life at the moment. that may or may not be an exaggeration. i’ll leave that up to you to decide.

aaron will wake up as early as 6am on his days off (mind you, liam and i never roll out of bed until 8am at the earliest) just to get some gameplay in. and i know i shouldn’t knock it, because we all have our own passions and our own interests and playing it really does bring him joy, but occasionally, when his playing bleeds into our daily routine, i find myself fuming. just a bit. usually i only poke fun at him for it, and it’s harmless enough and he understands my intentions, but there have been times, more than i’d like to admit, i’m afraid, when i’ve been rather snippy. those are the times i’d really like to avoid. it puts a bad taste in my mouth, the things i say and the way i say them when i’m short-tempered, and then aaron and i are at odds for anywhere between the half hour it takes to move onto some other topic to the rest of the damn day.

but today, i witnessed a miracle. i didn’t have to beg aaron to “turn off that damn video game already!” or remind him that violent, third-person shooters are probably not the best introduction to video games for an all too impressionable three year old. today, while toggling around on the controller or whatever it is that he does with that blasted thing, aaron had a light bulb moment.

well, not for free, per se. but after spontaneously becoming friends of the zoo (i blame the nice young gentleman at the front for tempting us into it with those friendly smiles he would flash us between bits of information and the almost-too-good-to-be-true price sheet he let us hold onto) this past weekend, we can now walk in without ever having to buy another ticket — well, at least until this time next year when our membership expires.

and so we did. unfortunately, i did not correctly remember the hours of operation for a weekday. it wasn’t until we pulled into the near empty parking lot that my error became apparent. aaron wanted to leave, didn’t think it was worth a go because of how little time we had. spent about two minutes of our half hour of zoo time arguing about whether or not we’d even go in. silly, really. but we had already pinky-promised liam we’d be visiting the zoo and seeing all his animal friends today, so turning back was not an option.

we had just enough time to ride the carousel (liam’s first ever! he was positively smitten!) twice, catch the very end of the sea lion’s last show of the day, wave hello and goodbye to the always-hiding polar bear, and pick out a kansas city zoo keychain to go with my dallas world aquarium one from when we were members there in 2014.

but packing it in and calling it a day after such a short, however happy, trip seemed wrong — especially when the spring-like weather we had been gifted was so divine. we ran home, cut up three red apples to bring with us, grabbed the penguin kite we had bought to fly on his second birthday but didn’t get the chance, and headed to the nelson. the grounds were even more vacant than the parking lot at the zoo; we saw maybe a collective ten people the entire time we were there. we sat quietly on the stairs outside the museum, watching the glorious, painting-like clouds roll on by, nibbling on bits of sweet, juicy apple and giving our scraps to the ants crawling under our feet. aaron and liam ran up and down the length of the lawn, against the strong, might-knock-you-over winds, gripping the string tight and flying the kite as high as it could go.

to continue the liam-trying-things-for-the-first-time thing we had unintentionally started that day, with the carousel ride and the kite flying, we decided to give a new-to-us thai restaurant in the crossroads a go and get liam his own plate of pad thai (our favourite). the rice noodles were a bit too long for his itty bitty toddler throat, even when wrapped snug around his fork, and gagged him once or twice, but he still fell madly in love with the dish like i hoped he would. he now calls it the “noodle-chicken-tofu-peanut-egg,” and says it makes his mouth “hot hot hot.”

right behind lulu’s thai noodle shop is cafe gratitude, a “solar-powered vegan restaurant making international plates and smoothies from locally sourced veggies” according to google. a good friend of ours works the bar there, and i had texted him before we sat down at lulu’s asking if he was working tonight, but when he didn’t ever respond, we took it to mean he probably was working because a) he’s a busy buzzin’ worker bee, always work-work-workin’ and b) he’s typically quite good at responding quickly to messages when not at work, and stopped in to hopefully find him and say hello, how’ve you been, it’s been much too long, let’s all get together real soon and do something fun — and also order a small glass of their rose lemonade because rose water, fresh squeezed lemons, and agave sounded like the heavenliest way to end our impromptu jaunt of a day. and it really, really was. 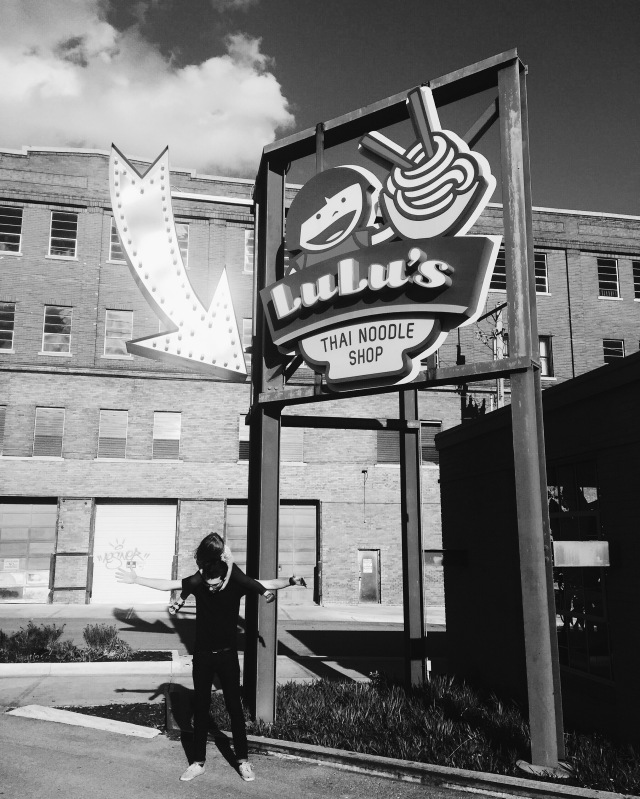